It's been a few weeks since I last updated and in that time I have played a further three Crusade games. I am really enjoying playing Crusade but it's proving an up hill struggle to both expand my roster and get people to play it. Too many local players just see it in a negative light because in theory it could end up quite broken and unbalanced. But if you are playing it for fun and taking it that way, there shouldn't be any issues. 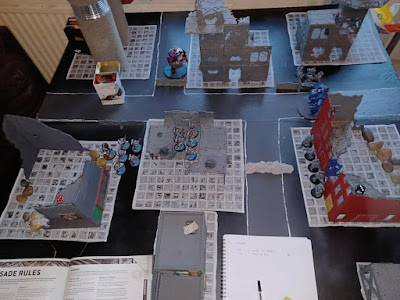 Game #2 was against young Chris and his Ultramarines. If you have read my previous posts, you'll probably remember that he's a new player and in six months since he started playing 40K has yet to win a game. With that in mind, I suggested that we play a small game to have more of an even chance plus he was still working his way around the Crusade rules and I didn't want to swamp him. We went with 25 power level and rolled the Assassination mission. I was the defender so he was out to kill my captain.

We both brought basically the same list. A captain with relic shield (although mine has the Burning Blade relic), a ten man Intercessor squad and a Redemptor Dreadnought (I have the heavy flamer and grenade launchers and Chris has the small onslaught canon and storm bolters). Quite a mirror match really. This ended up being a very short game with much bloodshed on both sides.

Our armies basically went at one another and left our captains to duel it out. We weren't worried about what the rest of our models were doing given the nature of the mission. Finally the two captains crossed blades. We spend three rounds battering each other but with 2+ armour and 4+ invulnerable saves we weren't doing much. Chris kept passing every save that I forced on him. His dice were on fire. Mine sadly were not, and he felled my captain on the fifth round.

Partly I was disappointed because my dice failed me a lot in that match but on the flip side I was really pleased that Chris finally got his win! The look on his face was great. After six months he finally got a win and the friendly satisfaction was obvious. Really pleased for him.

At the end of this match I think my Intercessors suffered a negative battle scar (although I forget what it was) and I felt that it was necessary to remove it with RP. 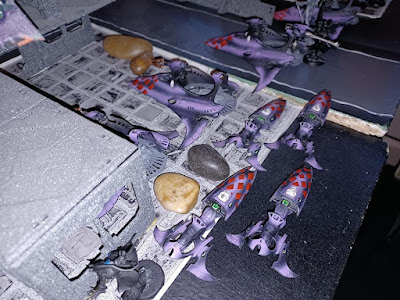 Game #3 was against my friend Dan's Harlequins. Dan has three Crusade armies on the go and presently was focussing on these. Having not faced Harlequins since the first couple weeks of 8th edition I was stoked to play against one of those rarer armies. Dan almost changed his mind to play Custodes but his cousin knowing I wanted to face the dancing Aeldari convinced him to stick to these. We went for 60 power level and rolled Raze and Ruin as the mission.

Bear in mind that this was before the recent balance update and I finally saw what everyone was talking about with these guys. Wow. I was tabled in three rounds (I didn't get my round 3) and all I killed of his were three troupe models and two jetbikes. I was absolutely massacred. I was decimated before I even really got the chance to move up the table and in close combat they ripped through me. Victory easily went to the painted Aeldari.

Thankfully in this game I didn't suffer any battle scars. The Redemptor did level up due to being the unit chose to be marked for greatness. I decided to give the plasma incinerator the auto-loader ability so it now has exploding 6's just like bolt weapons. I'm hoping that will be nasty in future games. I also used all my remaining RP to add two units of Outriders to my roster since some fast moving options were lacking from my list.

A fun game and I did want to face Harlequins but I was not expecting it to be such a total whitewash. 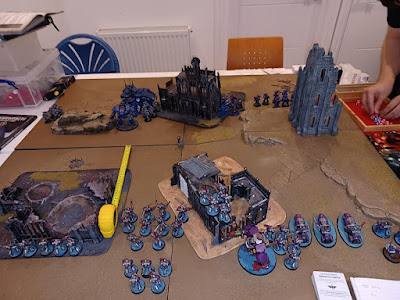 Game #3 was played last night. I had posted up to our local shop Discord about a Crusade game and the only person to reply was young mister Chris again. I was hoping to play against someone new but I'm not going to turn down a game. This time we went for 60 power level which is what Chris had at the time. We rolled The Relic which seemed like a nice mission to test our skills on and I was confident that this time I would seize victory.

I chose to combat squad my two Intercessor squads even though I usually dislike doing so. My idea being it would give me more options to snatch the Relic since Chris has decided to go full ten man squads. I hoped it would give me the edge. Chris brought two things though which gave me pause. The first was a Gladiator. He's very fixated on his tanks for some reason even in small point games. Crusade is a bit different than regular matched play but probably not something I would have taken at this stage. The other was a full six man squad of Bladeguard. That was going to be a tough cookie to crack if I had to tangle with it.

I really wanted the first turn and my usual run of bad luck played out. Chris went first. He focused all his fire into my Assault Intercessors which was sort of my plan. Sacrifice them so that the Intercessors could get up there and grab the Relic. With the new Armour of Contempt rule he succeeded in killing just two marines out of everything he fired into them. Didn't stop him just focusing on that unit for a couple rounds. Chris made some obvious mistakes early on and for my money that was one of them. He should have been focussing on the easier combat squads but he didn't realise that until much later in the game.

My first turn and that auto-loader upgrade to the Dreadnought paid out in spades. I dropped his Redemptor in one round of shooting. Maximum damage. Unfortunately it did not explode which would have been nice as his captain, lieutenant and Gladiator were right behind it. I don't think Chris was impressed but I was happy. My plan here was to sacrifice whatever in my army to achieve victory. Everything got up into the faces of the Ultramarines while the Intercessors snatched the relic.

Close combat was very much on his side however, especially with those damn Bladeguard. However, as the game trundled along Chris was not paying all that much attention to the Relic. He would gun down the unit holding it and the Relic got dropped slightly closer to my board edge each time. The point did come where I felt that as I lost models and units, that my sacrifice play was not working. I feared that once again Chris was going to snatch victory from me.

The Gladiator continued to do nothing thanks to Armour of Contempt and my Dreadnought basically tore it apart. Chris charged his captain and lieutenant into it and they promptly died despite the relic shields. It was at this point that I saw my path to victory. I had gone second so I had the last turn of the game and the Relic was sat six inches away from one Intercessor squad. They walked up it and did the action. The game ended with the Rift Wardens in control of the prize.

Now that game was good. It swung back and forth nicely and it was obviously not until the end that a clear winner was decided. Edge of the seat style stuff. I think Chris was a little disappointed but he could see that he made mistakes. From my side of the table, he didn't focus enough on the primary objective of the mission. A small flaw that I've noticed in Chris' playstyle is that he likes to go for the kill and doesn't always think about how that will win him the game.

At the end of that game things turned around and securing victory has really helped my Crusade list. Following these games, this is where my roster currently stands.

It's been a few weeks since I last updated and in that time I have played a further three Crusade games. I am really enjoying playing C...

Eryx_UK
Geek, gamer, and all round weird egg. I have been involved with hobby gaming for nearly 40 years now playing a variety of games.