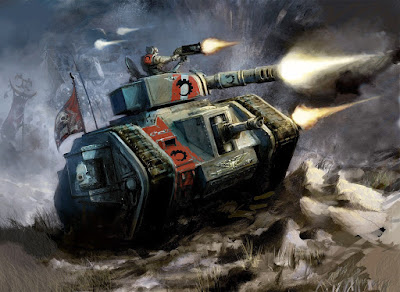 Thule Ultima is a shield world protecting the approach to Holy Terra from the horrors of the Warp that spill forth from the ruins of Cadia. Garrisoned by over a dozen full regiments of the Astra Militarum. Thule Ultima stands as the greatest bulwark against the advance of Abaddon and his legions of chaos space marines.

Recently agents of the Ordos Xenos seized control of a rogue trader vessel suspected of engaging in illegal activities with alien species. On board they found a nest of genestealers and cultists. Records indicated that the ship had come from Thule Ultima, and psychic interrogation of the ship's crew revealed that the shield world had fallen to a genestealer cult calling itself The Cult of the Faithful.

Aware that the Dark Angel battle barge - the Spear of Truth - was returning from a conflict in the Hera system, the Ordos Xenos asked them to investigate. The space marines translated in system and made for Solaris, the moon of Thule Ultima. A small strike force was deployed to catch the cult unaware and prevent them raising the alarm.

This game started off simply as a means of crossing the Dark Angels off my list of armies I wanted to play against. I only know of two people who play Dark Angels, my nephew and my friend Joel. Joel hasn't played a game of 8th edition to my knowledge so it seemed like a good way to bring back into the hobby.

After our match I had the idea of getting some more games in with him and his Dark Angels, and the idea of a narrative campaign separate the club's Vigilus games seemed like a fun way to do it. Hopefully it will make for some interesting battle reports.

The introductory mission seemed like a good way to get Joel back into the game easily and I quite enjoy the simplicity of it. We set up the four objectives up in a roughly T shape centrally, and then Joel decided on the classic Dawn of War deployment. Joel set most of his army up on the right flank of the table with some deathwing terminators and a terminator librarian in deep strike aboard his battle barge.  What worried me most though was his flyer, which I had no real defence against. Most of my army was deployed as blips which was unexpected by my opponent. My patriarch, primus, hybrids and genestealers waited in reserve, deep in the tunnels beneath the lunar surface. 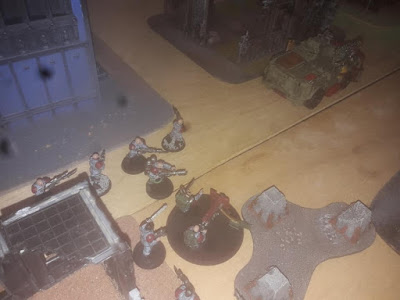 We then rolled for the actual mission and it was the Relic special. The objective on my left flank turned out to be the one we needed - presumably the communications console to warn the surface. Joel had nothing deployed near it and I was going to have to use some stratagems if I wanted to ensure it remained safely in cult hands. Joel then infiltrated some scouts into a ruin across from the objective. All very sneaky.

I had the first turn. On my left flank I moved my rockgrinder forward towards his scouts. Next turn I wanted to burn them down with my clearance incinerator. One unit of brood brothers advanced behind it. The idea being to get them onto the objective as quickly as possible. My magus moved that way as well but only because I didn't really have a plan for what to do with him. Nothing else moved and I kept focused on the approaching ravenwing bikers. 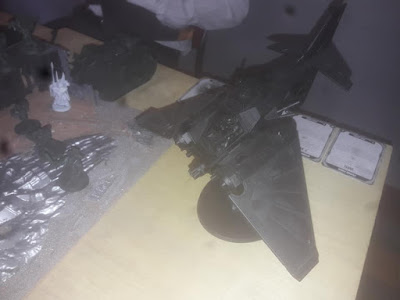 First shot of the game and my second brood brother squad managed to take some wounds off of Joel's Nephilim jetfigher with their lascannon, although I used the free re-roll the mission gave me to increase the damage from 2 to 3. A good shot but I would have liked more. The cult leman russ tank got a good number of battle cannon shots into one biker squad dealing a good amount of damage and turning my opponent's ire upon it. My Astra Militarum leman russ executioner however did the opposite and I'm not even sure now that it inflicted any wounds.

On Joel's first turn he zoomed the two bike squads forwards, and even restored one to the living with his apothecary. He brought the nephilim swooping forward so that it was the facing the brood brother squad I had advanced towards the objective. His shooting decimated that squad, killing them to a man. The bike squads opened fire with their plasma weapons into my cult leman russ and although the recently restored battle brother blew himself up, they destroyed my tank with ease.

Turn two and my neophyte hybrids used a stratagem to vanish back into the tunnels. I decided to keep everything else on my right flank to occupy the Ravenwing bikers and the predator tank that Joel had hidden up on his corner of the table. I also used a statagem to have my acolyte hybrids pop up right next to Joel's scouts and burn most of them down with hand flamers. I managed to drop a couple more bikers and knock some wounds off of the nephilim as well, but I was having a hard time hitting that as it flew past.

Joel's turn two was fairly simple too. The Ravenwing bikers sped forward spitting fire into my troops and the executioner. A well placed high damage shot from his predator destroyed my executioner, which was disappointing as I had hopes for that taking out the rest of his Ravenwing. 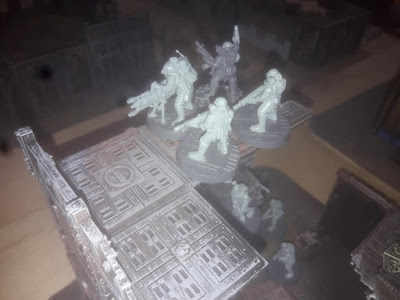 Turn 3 and I dropped in my neophyte hybrids almost on top of the objective. I made sure they were close enough to be able to snag it if needed but within range of the surviving scouts. My primus scrambled up from the tunnels next to the objective so at least it was mine for the time being. Across the table I brought in my patriarch and his genestealers. The hope being to get into combat and tear through a few. I turned the rockgrinder towards a 5 man tactical squad that was inching forward up the table. The shooting phase saw my neophytes drop the last scouts and the rockgrinder dropped all but a couple of the tactical squad. Come the assault phase, I lost two or three genestealers to the bikers and then failed the charges of both the 'stealers and the patriarch.

Joel's turn 3 and down came his reinforcements - a 5 man deathwing terminator squad and a teminator librarian. Both came down on my left flank just able to deploy beyond the objective and my primus. He attempted to smite my primus but inflicted only a single wound. Unfortunately due to deathwing assault and an excellent shooting phase, the terminators decimated both my primus and the neophytes but it meant that no one held the objective.


And there we had to end the match as the venue was closing at the end of the evening. Although had the game continued Joel would have won because of his terminators, as they would have walked forward and pressed the off button. We both agreed however, that calling his first 8th edition game a draw was a fair and reasonable outcome given that neither of us held the objective at the end. We both had fun and I think joel learned a lot about the new edition.

After a long and hard fought battle, the Dark Angels had lost the element of surprise and the alarm had been sent to Thule Ultima. The Cult of the Faithful began to arm itself and prepare to the face the wrath of the space marines! 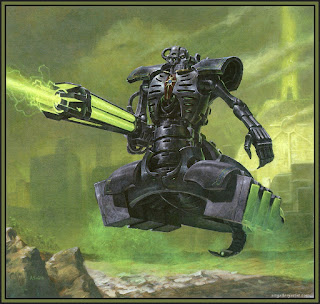